A History of Andamooka

This section of the website contains a wealth of stories and facts collected over the years and this information is being systematically collated and recorded by History Group volunteers.

Categorised decade by decade with a section on stories from our past, the information is being added to constantly.

A series of historic exhibits with supporting literature is being developed together with a series of audio visual presentations. Exhibitions will be listed on the Annual Calendar of Events.

Wonderful images of Andamooka’s history and heritage can be found in the photo gallery.

Andamooka’s origins began with a waterhole pointed out by John McDouall Stuart on 21st June 1858, when exploring the region for pastoral settlement. There were several waterholes identified in the region, one at Chimney Hole located on the track to Lake Torrens and another …

In 1872 a pastoral lease was taken out for Andamooka Station which encompassed a sizeable section of the area. Andamooka township and Andamooka Precious Stones Field are located within the boundaries of the station, the management of which has recently been handed over to the Kokatha who are traditional custodians of these lands.

Fifty eight years after the establishment of Andamooka Station in 1930 two boundary riders, Sam Brookes and Roy Shepperd, discovered opal at the site now known as Treloars Hill. The story goes that they were caught in a thunderstorm and whilst sheltering under a tree a pretty coloured rock caught their eye. The rock was taken back and later identified as being opal. They attempted to keep the find a secret but word got out, triggering a rush of miners heading for Andamooka with the township established within the station boundaries in 1933.

Whilst the lure of opal did entice the first settlers to Andamooka some others settled here for more complex reasons. It seems the “free”‘ and largely ungoverned lifestyle of this outback town held an attraction for many people who were leaving Europe after experiencing the horrors and constrictions of war. An interesting interview by George Negus highlights this for us (read more here) (need to get link from Conrad)

Early living conditions during the Depression years were to say the least, difficult but certainly practical, with miners and dealers making use of local materials in the construction of their early semi-dugout homes, typified by the Heritage Listed Cottages in the Historical Reserve.

This mix of reasons helped to create a multi-cultural environment that gives Andamooka a distinctively unique feel even to this day. While conditions have improved over the years, Andamooka has never lost its unique character or characters.

Population: the population of Andamooka during the 30’s was hard to determine as it was spread widely across the opal fields with many miners living in tents or ramshackle arrangements built of acacia wood , metal and cloth.

Nomadic indigenous groups frequented the region with some choosing to settle around the progressively growing township, finding work with miners who employed them to search through diggings for opal after recognising their superior ability to spot the elusive gemstone. In return the indigenous workers could buy supplies from the shops that had been established in the main section of the town. During the 1940’s the indigenous population constituted around one third of the population.

Housing: The harsh environment and extreme climatic conditions posed a challenge to early miners that settled Andamooka, to build homes that could provide them with shelter and relief from constant winds, freezing winter nights and baking summer heat. The resulting semi-dugout cottages were typical of the innovative thinking employed by this isolated community.

With around two thirds dug underground backed against the hot afternoon sun and the remaining third built of solid earth and stone with small windows and rough metal clad roofs insulated with a variety of materials ranging from stuffed hessian sacks to thatch made from local brush, the homes maintained a more liveable constant temperature, but also provided for light, ventilation and a flow of cool night breezes in summer.

These historic dwellings, constructed during the 1930’s still exist today thanks to the efforts of local volunteers and have been heritage listed. Visitors are invited to explore them along with the collection of household goods, tools and implements on display within and around them to get a true understanding of what life at that time would have held for the early miners and what stories they hold.

Mining: Mining during this period was undertaken with picks, shovels, bucket and wheel-barrows.

A shaft would be dug, just big enough for a miner to work inside, to a depth of anything up to 30 feet. Dirt would be broken with a pick and shovelled into a bucket which would be pulled up to the surface, emptied and dropped back for the next load. Fortunately, Andamooka subsoil and structure is very stable and so collapses were and still are rare.

Once the opal bearing level was reached, digging would tunnel sideways from the shaft following the ‘vein’ which at that time were often quite rich with opal. The tunnels were barely large enough for the miner to move with many working from a lying position. There was no guarantees of how long the line of opal would last or how deep it would extend to each side of the tunnel but if it continued on, a ventilation shaft would need to be dug.
     
With a lack of water to wash away the loose dirt as is done in places such as Lightning Ridge, basic noodling equipment included metal mesh screens attached upon large springs to sift the fines and separate the stones which were then examined for opal. Hammers and solid metal blocks were used to bash the stones open to reveal the opal inside.

The price for opal at the time……. so returns for this seemingly absurd existence were worthwhile and this being the time of the great depression and work otherwise often impossible to find, opal mining was seen as an opportunity to move forward in life.

In the aftermath of WWII there was a large influx of migrants from Britain and Europe into Australia, all looking to build a new life in this young country of opportunity. During the War so many people including nationals, had experienced horrors either as citizens or in the forces. There were many who found it difficult to return to life as normal, so for them Andamooka offered not only an opportunity to make a living, but also an escape. Some had issues to work through or to bury. One such story is that of xxx who told his story in the Andamooka Press in….197x

Mining: Over the 40’s opal mining in Andamooka became more mechanised, albeit with some amazing innovations constructed from all types of machinery parts. Elaborate pulley systems were introduced that made the work quicker and less taxing, but they were still mainly manually driven.

Towards the late forties army surplus vehicles and machinery became available and many miners saw the opportunity to work the ground harder and faster with the use of these. Many of the vehicles, machines and associated innovations for mining can be seen around Andamooka today and also on show at the Historic Machinery Display.

Above ground, chain driven bulldozers where used to push the top soils and eventually open up the opal bearing levels and this work was done extensively throughout the opal fields. Pulley driven excavators ripped through the ground exposing opal bearing ground at a rate not experienced before. Converted army trucks carted loads of this up to the surface where it would be worked through, often by indigenous people, and the opal then cleaned, trimmed and sold to a seemingly endless line of buyers.

Underground, pneumatic drills cut through the tunnel walls with ease, but the drills are heavy and hard work so many miners worked in partnership or employed help with one drilling and the other transporting the ground to the surface via ever improving pulley and bucket systems. Some of these arrangements have been motorised and still in use today.

Fuel was costly, but opal was plentiful and in demand

Stories From Our Past

The Legendary ‘Sheriff of White Dam’

A comprehensive account of this highly respected and most loved Andamooka character is contained within a handwritten transcript named ‘Bill MacDougall, “The Sheriff of White Dam” 23-3- 1916 to 1989 and still going strong’., and ‘The Final Chapter’., by Jillian K. Butterfield, 1989. Copyright applies.

Bill settled in White Dam, a small mining settlement of around 11 shacks in 1965 after working a mining claim on the White Dam field whilst living and working in Woomera. At about that time an RFDS doctor came to his rescue when he suffered loss of sight and that prompted him to help raise money for the RFDS and the legend was born…..
Bill raised over $xxx for the Royal Flying Doctor at Bill’s Pub, and in 1989 re was awarded an ‘Order of Australia’ Award for his incredible efforts. Bill also attracted many visitors to Andamooka/White Dam helping to put Andamooka ‘on the map’.

On 5 November 1989, Bill Macdougall passed away peacefully in the Royal Adelaide Hospital. He may be at rest, but his legend and legacy live on.

The Child with the Carnations

A post WWII story simply signed ‘L.G.’ typifying the reasons why a number of migrants found the freedom of Andamooka so attractive. 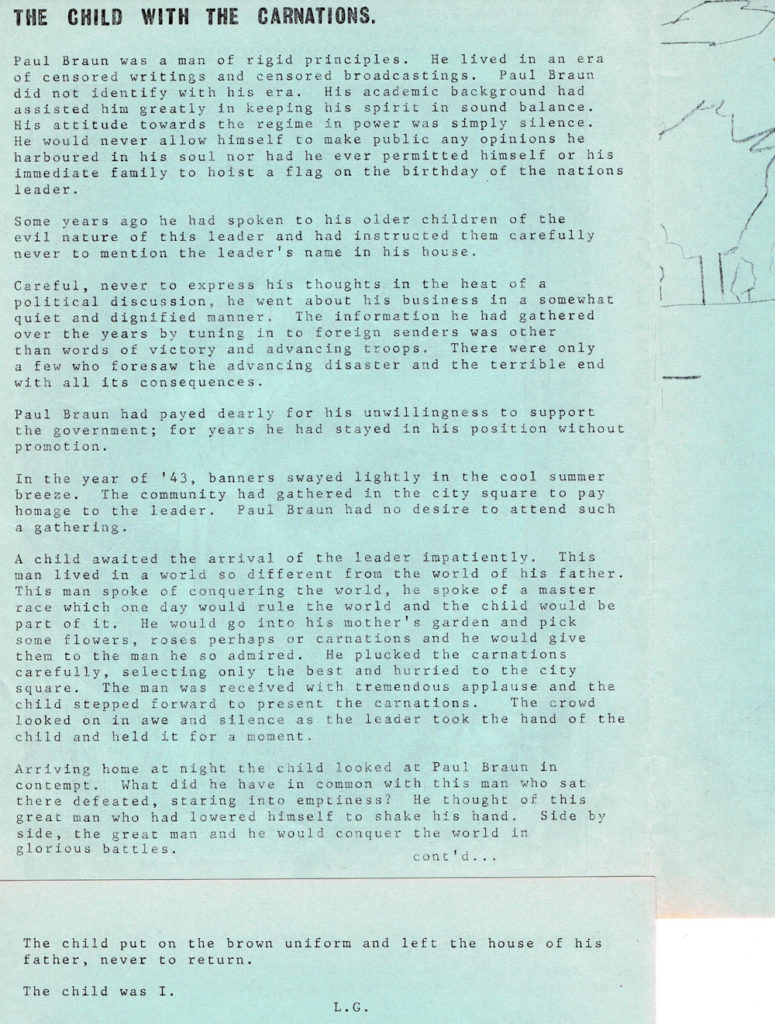 The first Ambulance Vehicle used in Andamooka was a VW Combi Van. This was used for emergencies and also by the sisters at the A.T.M. Hospital to get around the fields.

This was replaced by a St John’ Ambulance in 1976. The headquarters for this area is Port Augusta but a local Committee in Andamooka handles most of the business.

In late 1978, the Holden ambulance was changed for a 4-wheel-drive. This is necessary as it is needed mainly for emergencies in very rugged or very wet conditions when the flying doctor plane is unable to land.

The vehicle is kept at the Hospital so that, in an emergency, the sisters have it at hand.